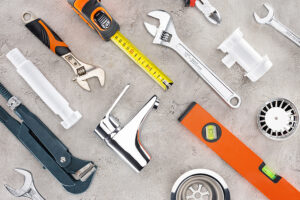 of the first things you’ll notice about the licensed plumbers in Cherry Hill from Davis Home Services is that we always do our jobs with a smile. We like to have fun, and our sense of fun rubs off on our customers as well.

So don’t allow that plumbing problem to leave you feeling blue! We’ve gathered some plumbing facts in this article to put a smile on your face. Here, you’ll learn some cool trivia about plumbing as you book that appointment.

3.  Since 1963, U.S. homes have installed more than 5.3 million miles (28 billion feet) of copper piping. For context, that length equals running a single copper tube around the earth 200 times.

4.  Archeological evidence from the palace of King Minos of Crete has shown that flushing water closets existed over 2,800 years ago. Therefore, the old joke about Sir Thomas Crapper inventing the toilet is not factual.

5.  Sir John Harrington built a flushing toilet for his godmother Queen Elizabeth I in 1596. The gesture turned his name into the nickname for flushing toilets in the U.S. So, the next time you hear someone say they’re going to “the John,” you know the origin of that nickname.

6.  Alexander Cummings filed the first-ever patent for a flushing toilet in 1775.

7.  Albert Einstein loved plumbing and once mentioned that he’d become a plumber if he had to start life all over again. The statement resonated with the Plumbers and Steamfitters Union in Washington, DC, so they made him an honorary member. A group of local plumbers in New York also sent him a set of gold-plated plumber tools.

8.  Installing a low-flush toilet can save you 18,000 gallons of water each year.

9.  The word “plumbing” comes from the Latin term plumbum, which means “lead.”

10.  Always set your water heater at no hotter than 125°F. Higher temperatures increase the risk of a burn. At 165°F, your skin will burn in less than a second.

11.  The bathroom has gone by many interesting names over the years.

12.  The average person spends around three years of their life on the toilet.

13.  38% of the water consumed in U.S. households goes to flushing the toilet.

15.  Here’s a money-saving plumbing fact: you could lose six gallons of water per day (2,160 gallons per year) from a leaky faucet if the leak fills a standard eight-ounce glass in 15 minutes. There’s your motivation to have us check that leak out as quickly as possible!

18.  England passed the National Public Health Act in 1848. This act established the country’s authority to quarantine citizens amid infectious disease outbreaks. The rest of the world adopted the code shortly after.

20.  About 0.3% of homes across the country have a minor plumbing leak.

21.  The toilet on the International Space Station is the most expensive toilet in the world at $19 million. The unit converts waste into drinking water while strapping the astronauts in place to prevent their waste from floating around. Are you looking forward to a glass of that drinking water?

22.  The floating mechanism in most toilets is known as the ballcock. It controls the flow of water to and from the tank.

23.  Sir William Congreve, a Brit, created the first fire sprinkler system. He achieved this feat by installing perforated pipes along the ceiling. He also installed a valve outside the building to transfer water to the perforated pipes when the valve is open.

24.  Urinals in Japan are very high-tech. Some of them feature voice-activated flushing mechanisms.

25.  A $100,000 study on how people place their toilet paper on the holder shows that 75% of the population love placing the toilet paper with the flap in the front.

26.  The Super Bowl halftime sees the highest number of flushed toilets for the year.

27.  Al Moen invented the single-handle faucet for hot and cold water in 1939.

28.  Sewer systems contain a heavy dose of drugs because we excrete 90% of ingested pharmaceuticals via urination.

29.  There have been many documented cases of alligators inside sewer systems. No one knows how these reptiles got in there. However, a popular theory is that some people may have accidentally flushed their pet alligators down the drain.

We hope you found these plumbing facts interesting. Some of them make for fun conversation starters the next time you’re out with friends and family. You can also use them to spice up family game nights!

At Davis Home Services, you can count on us for all things plumbing. Talk to us today if any of the above plumbing facts have resonated with you or reminded you of a current plumbing problem. We can solve your faucet leaks, make your water heating process more efficient, and clean out your drains.

You can learn more about drain cleaning services or call our information desk at 844-226-9872 for any inquiries you may have.